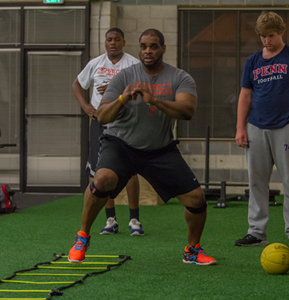 Professional:  Kireem attended Bishop McNamara High School where he lettered three years in Football and Basketball. In his senior year, playing right tackle and defensive end, he was selected to the WCAC (formerly WMAC) conference first-team. Kireem was recognized as a Super Prep All-American, and NBC 4’s George Michaels’s Golden 11 as one of the top offensive players in the DC/MD/VA area. At the conclusion of his senior year, he was selected to the Chesapeake Classic All-Star game for Maryland versus Virginia and named team captain as an offensive tackle.

He received a full athletic scholarship to Howard University. At Howard, he was coached by Fred Dean (original member of the Washington Redskins Hogs). As a 3 year starter, he was part of two champion teams and was the recipient of many awards, playing all five positions on the offensive line. Kireem signed his first professional contract with the Philadelphia Eagles, where he was coached by greats Jon Gruden and Bill Callahan (Washington Redskins offensive line coach). He went on to sign with the Baltimore Ravens and received direction from great players like Orlando Brown and Hall of Famer, Jonathan Ogden. Kireem is a specialist in footwork precision and quickness from stance to start.

Coaching philosophy:  Kireem’s coaching philosophy includes stance perfection, quickness, and proper technique through repetition, footwork and violent hand usage to create space. He trains the critical nature of the first two steps of a lineman. “As the game evolves, and quarterbacks become more mobile, lineman will have to hold blocks longer and create space. We work on quickness, power in your base, and violent punch. Showing your opponent , within your first two steps and your initial punch, that he has a long day ahead of him.”