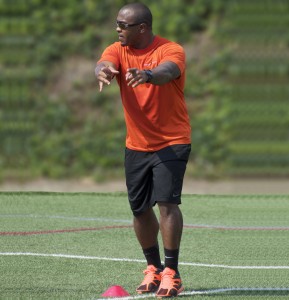 Professional: David is a Prince Georges County native who was a highly recruited 2-sport athlete coming out of Largo High School. Although football and track were his top two sports, he also played basketball as well. Having an exceptional career, he was awarded numerous accolades from being All-Conference, All-County, All-Metropolitan, and being considered by Super prep-magazine as one of the top RB’s in the state of MD.

As a sophomore David helped lead his team to the State Championship game as the starting defensive end and also as a backup offensive guard. However, in his junior year at Largo is where he was finally awarded the opportunity to run the football and rushed for over 1300 yards helping his team reach the semi-finals of the playoffs. As a senior he left an impressive season at Largo high school being one of few running backs to rush for over 2200 yards his last year and 24 touchdowns. He also set a few school records along with some MD State records as well. Being recruited by many tops schools, however it was Howard University who won that battle.

During his tenure at Howard, David was a RB that was hard to tackle. He had the ability to make you miss in the open field and also take it the house. His vision and ability to change directions without a loss of speed made him an exciting player to watch.

After a successful collegiate career, David started coaching a few years later at Archbishop John Carroll High School located in Washington, DC as the running back’s and strength coach.  In 2007, David signed a 1-year contract to play with a new Indoor Football team of the AIFA League called the Baltimore Blackbirds where he played the solo RB position. At the midpoint of the season he lead the team in touchdowns with 8. Unfortunately, the team folded and started a new program and David began enjoying life with his daughter.

Coaching Philosophy: David’s coaching philosophies emphasizes the importance of commitment, hard work, and the desire to get better. “Running backs are born and not made” is one of his favorite sayings.  David is also a very enthusiastic coach who also preaches, “I can’t teach you something if I can’t do it myself” which is why he demonstrates and sometimes participates in all his drills.