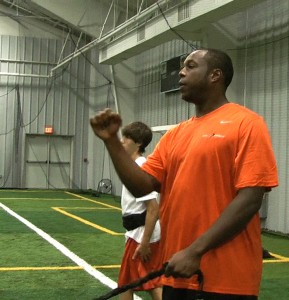 Professional: Bryson attended Episcopal High School in Alexandria, Virginia, where he lettered all 3 years in, football, basketball, and track and was the Senior Captain of all three sports. He helped take the basketball team to three state championships, and was the MVP all three years. His senior year of football he threw for 1388 yards and 16 touchdowns, ran for 888 yards for 21 touchdowns.

He led the team to an undefeated season, 9-0. Bryson was first team All-League, All-District, All-Met, Interstate Athletic Conference First Team basketball and football. He was ranked as the #1 Quarterback in Virginia by The Washington Post his senior year and ranked 12th in the country. Following his stellar high school career, he selected to go to the University of Virginia on a football scholarship. After playing two seasons at the University of Virginia, he transferred to complete his college football career at the University of Richmond. Bryson dominated at the college level, thus he signed a contract with the Seattle Seahawks.

He has also played with the Jacksonville Jaguars, Washington Redskins and allocated to NFL Europe by the San Francisco 49ers. In NFL Europe, he navigated his team to the championship and winning the World Bowl. In 2007 he returned to Episcopal High School as the quarterback’s coach and offensive coordinator.

Coaching Philosophy: Bryson understands quarterbacking requires the discipline to be calm under intense and chaotic conditions. He believes preparation, confidence, focus, and attention to detail are essential in the development of a QB, on the field and in life. “I believe you are either getting better or getting worse. No one stays the same. What are YOU doing to better yourself?” states Bryson.