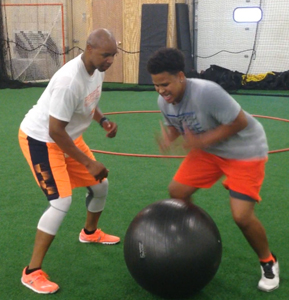 Professional:  Antonio attended Wilson Hunt High School where he lettered three years in Football, Basketball and Track. He was a full-time starter as a Freshman at Tight End/H-Back and Defensive End. In his junior and senior year, playing tight end and defensive end, he was selected to the All Big East Conference first-team. Antonio was recognized as an All State tight end by NCHSAA during his senior year, and had numerous appearances on Football Friday Night broadcasted by WRAL 5 in NC. After his senior year, he was selected to the North Carolina East vs West McDonald’s All-Star game representing the East. He was also selected as an alternate for the Shrine Bowl of the Carolinas, where North Carolina’s best took on the state of South Carolina.
He received a full athletic scholarship to Howard University. At Howard, he was coached by Fred Dean (original member of the Washington Redskins Hogs) and Ron Springs (former Dallas Cowboys running back). As a true freshman, Antonio started all 11 games for the Bison at H-back. He was part of a Black College National Championship during the 1996 season. After the 1996, Antonio made the full-time switch to defensive end (coached by Sanders Shiver LB Baltimore Colts). While playing defensive end, Antonio displayed a relentless attitude, speed and agility and a knack for sacking opposing quarterbacks. After his collegiate career was complete, Antonio was invited to the Baltimore Ravens Free Agent camp. He was coached by Marvin Lewis (Current Head Coach Cincinnati Bengals) and received direction from great players such as Ray Lewis and Peter Boulware. Antonio also played Semi-Pro football for the Prince William Monarchs (formally of Prince William County VA), during his time with the Monarchs, he spearheaded one of the country’s best defensive units. Antonio is a specialist in hands, hips, and footwork precision.

Coaching philosophy:  Antonio’s coaching philosophy includes stance perfection, play recognition, take-off/quickness techniques, proper hip placement technique through hard work and repetition, footwork and violent hand usage to win battles at the line of scrimmage. He trains the critical nature of the first two steps and hand placement of a defensive lineman. He believes that an effective defensive lineman will continuously train his hands, hips, and feet.